In addition to regular the OSCE Academy policy brief series, the OSCE Academy supports various research projects investigating important political, security or economic topics in Central Asia. Below are selected papers produced at various times by researchers affiliated with the Academy. The Research Guideline of the OSCE Academy can be found here. 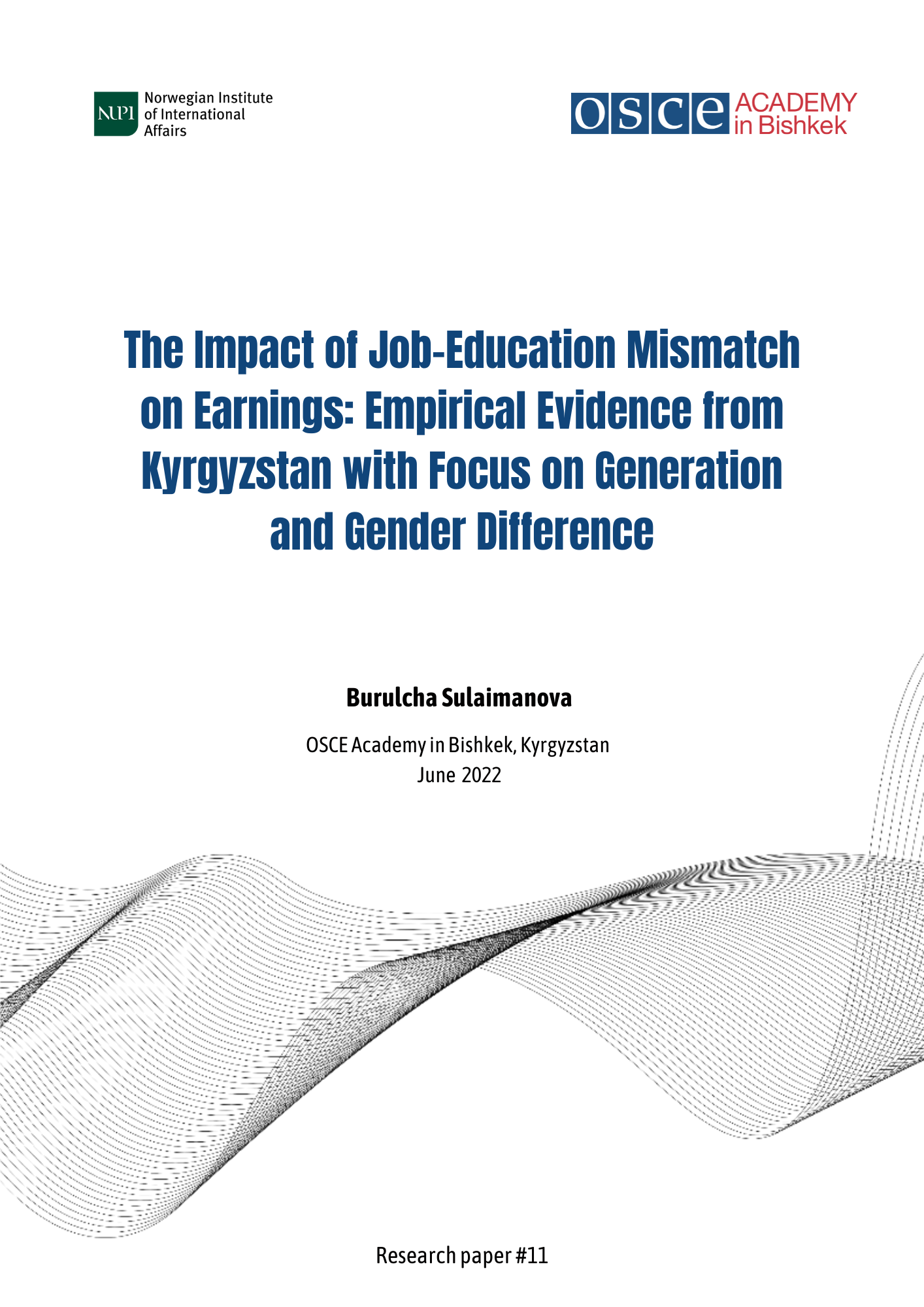 The Impact of Job-Education Mismatch on Earnings: Empirical Evidence from Kyrgyzstan with Focus on Generation and Gender Difference 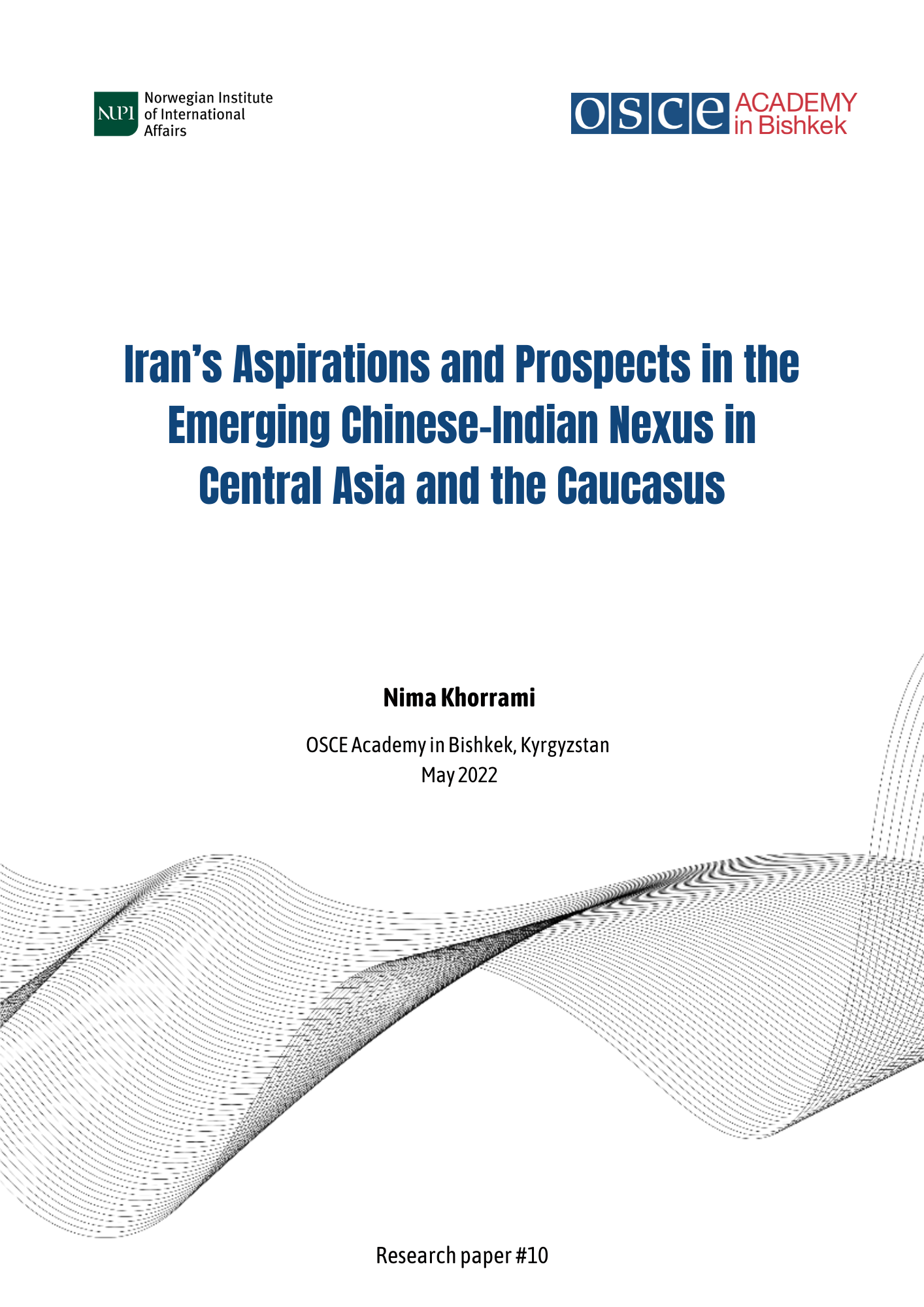 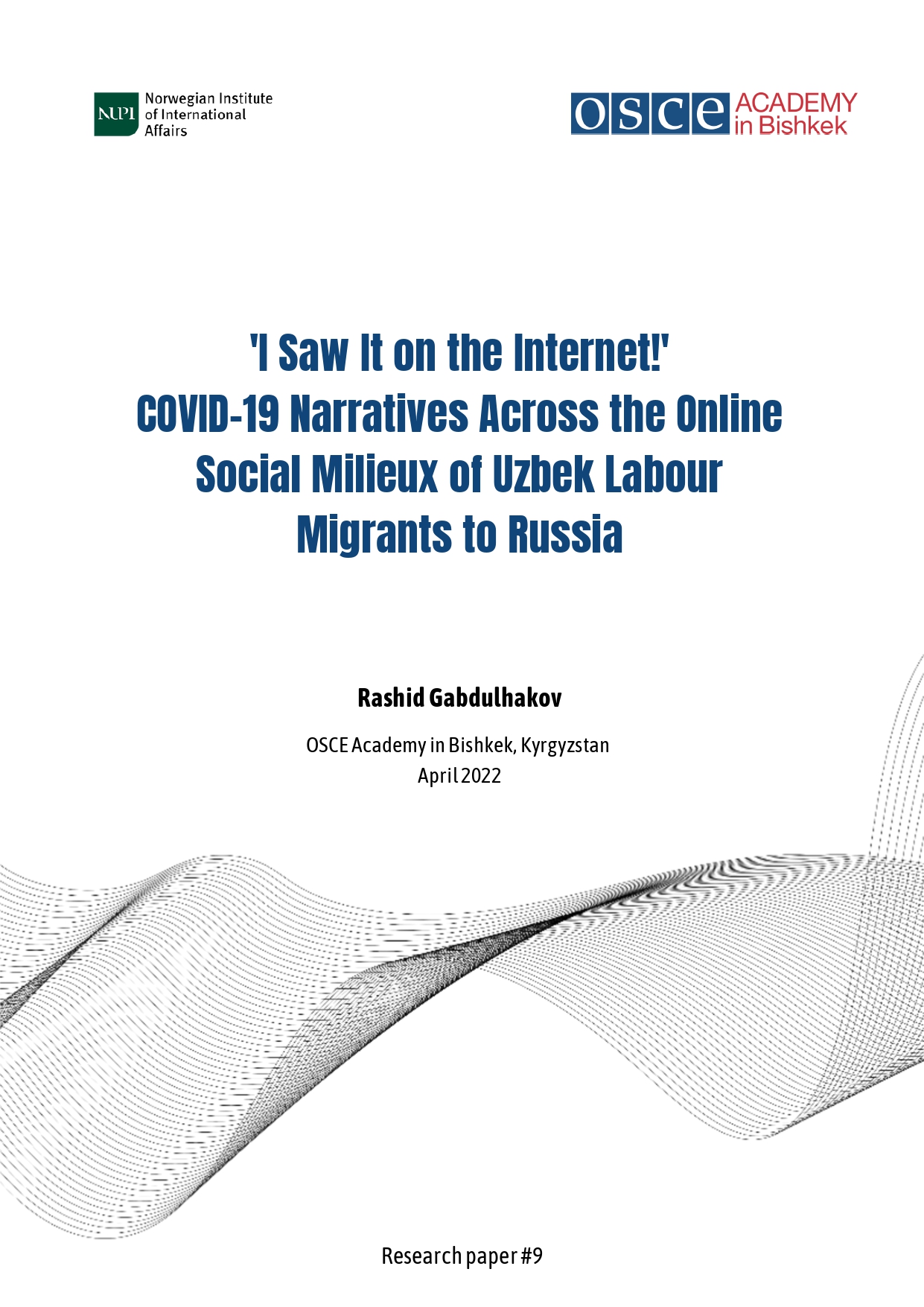 “I Saw It on the Internet!”  COVID-19 Narratives across Online Milieux of Uzbek Labour Migrants in Russia

Although important incidents of misleading information related to the global COVID-19 pandemic have been examined by both journalists and academics, the various sources of such information and the magnitude of its impact have yet to be fully comprehended. Additionally, there are cases and contexts that are underrepresented in current studies. To address this gap, this article examines the online social milieux of labour migrants from Uzbekistan to Russia as potential source of misleading information related to COVID-19. Specifically, this article looks at discussions and posts shared on thematic groups across social media platforms such as Odnoklassniki, VKontakte, Facebook, and Telegram through a netnographic lens, identifying five COVID-19-related narrative clusters: 'the remedy,' 'practical information,' 'the news,' 'asking for help,' and 'conspiracies and religion.' As all these narrative clusters have been found to contain misleading information, the article initiates a discussion on the role that thematic social media groups can play in (dis)informing labour migrants. 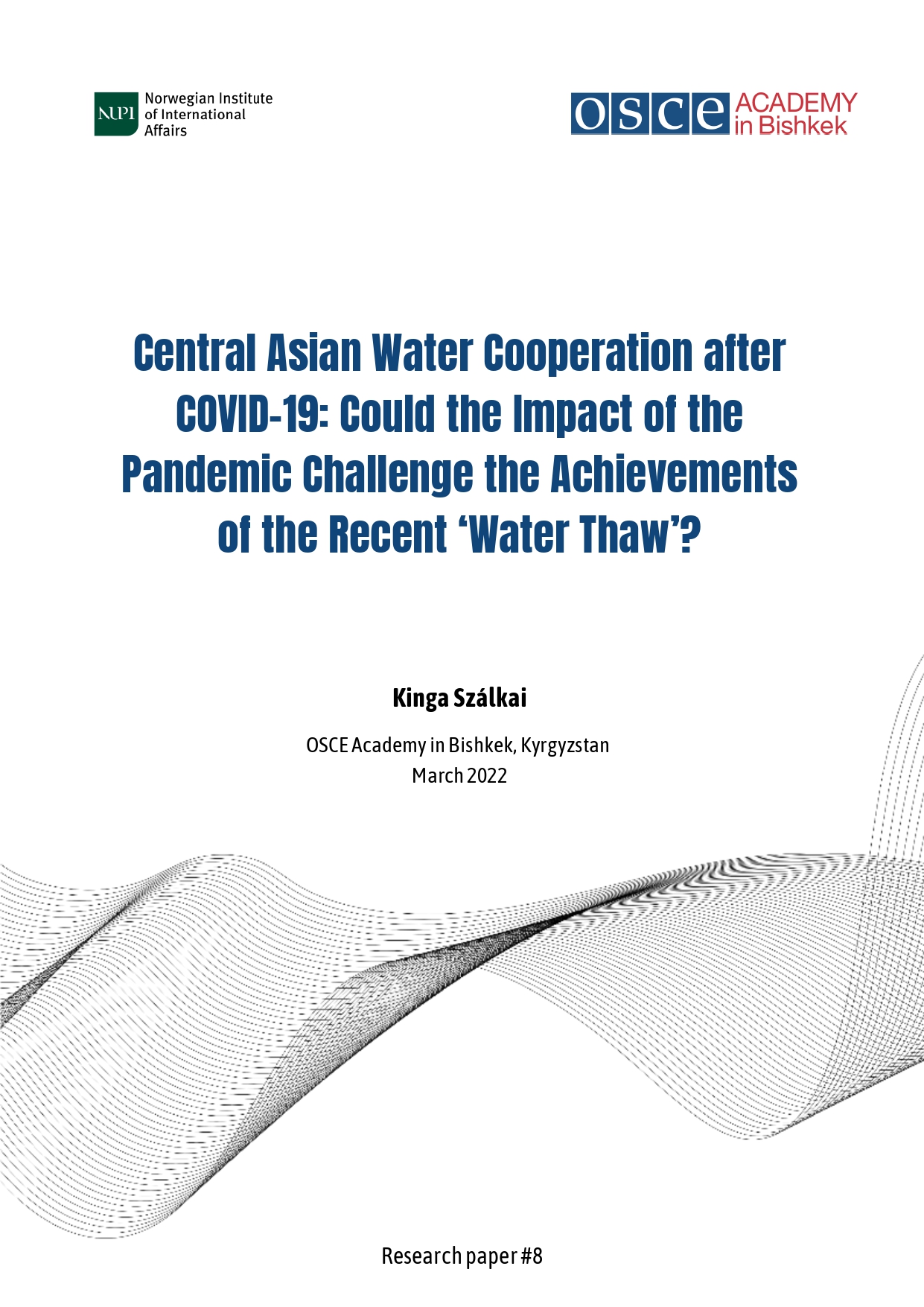 Central Asian Water Cooperation after COVID-19: Could the Impact of the Pandemic Challenge the Achievements of the Recent ‘Water Thaw’? 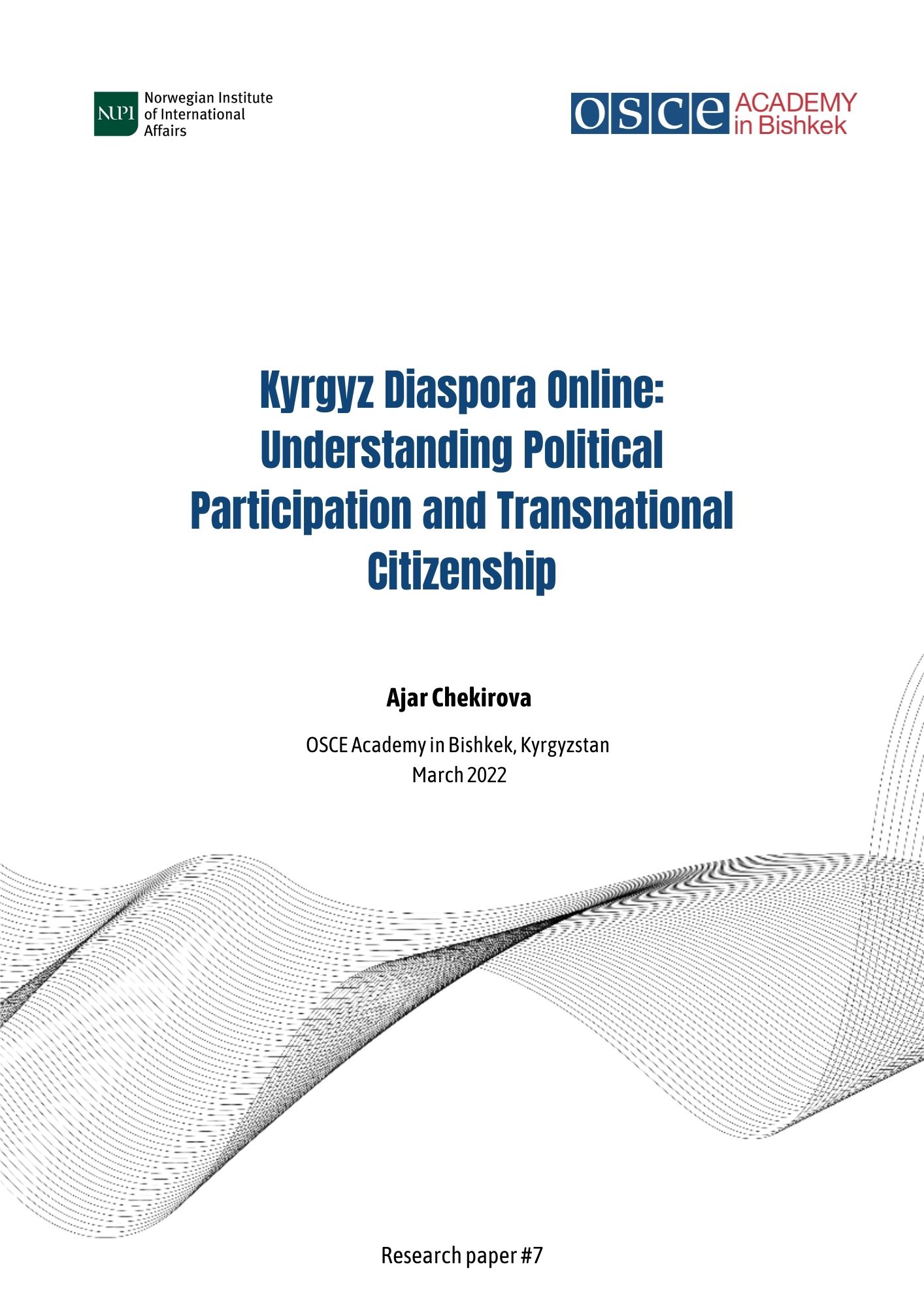 In an attempt to address the debate among social science scholars regarding whether or not online political engagement is a legitimate form of political participation and exercise of transnational citizenship, this study investigates the conditions under which migrants engage politically with virtual communities; when and how online participation spills over to real-world social mobilization; and whether cross-border online-offline political participation creates a new form of transnational citizenship. Content analysis of virtual social media groups and pages on VKontakte, Odnoklassniki and Facebook demonstrates that, although migrants are not likely to routinely participate in, initiate, or continuously engage with political conversations on these platforms, crisis conditions, such as the October revolution in 2020, the first COVID wave the summer of that same year, and the Kyrgyz-Tajik border conflict in April-May 2021, trigger bursts of political activism on social media which carry over to the real-world in the form of fundraising and protest mobilization. 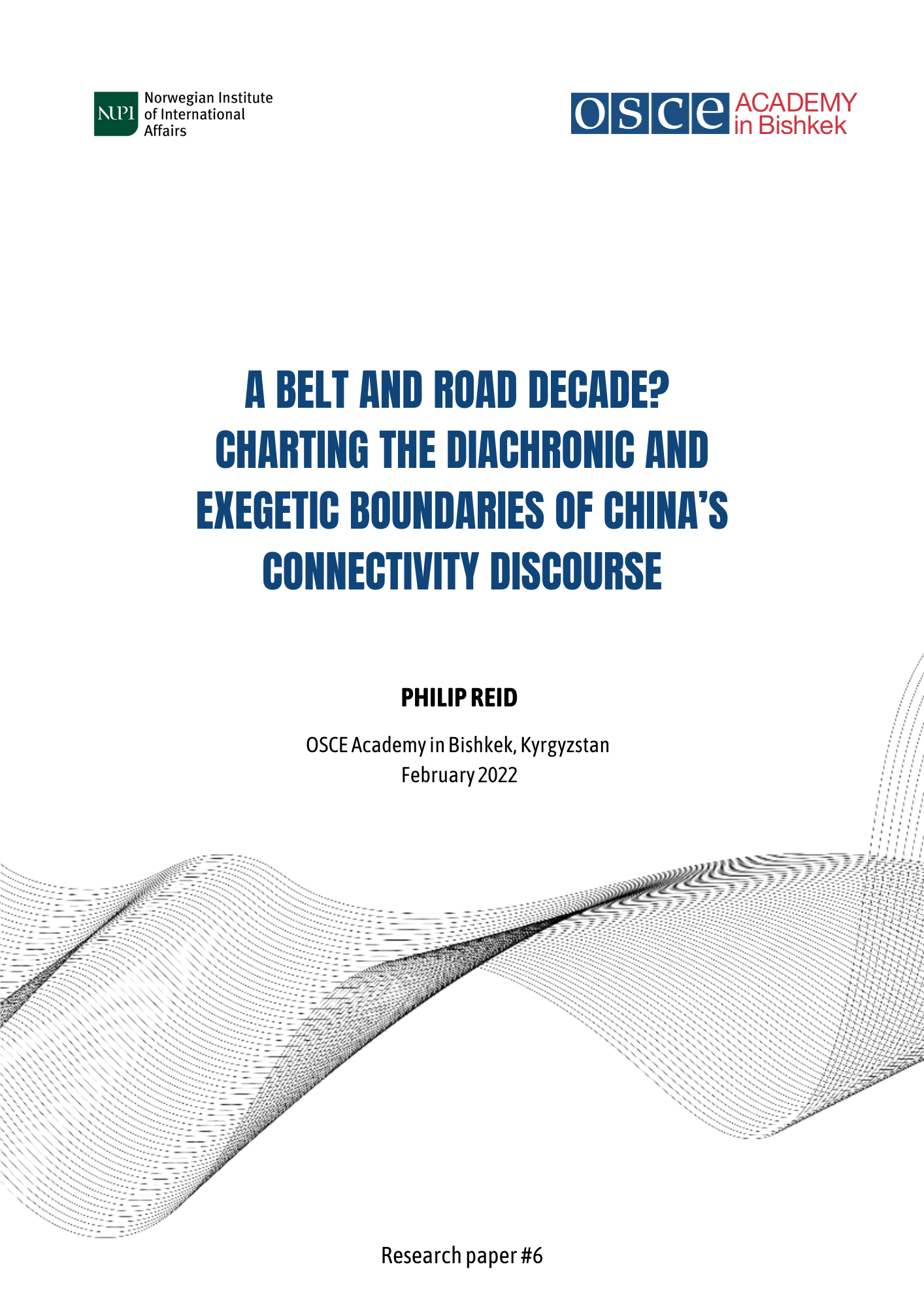 A Belt and Road Decade? Charting the Diachronic and Exegetic Boundaries of China’s Connectivity Discourse

Since its announcement in 2013, the Belt and Road Initiative has generated a prolific commentary in global news media and academia. Beyond merely chronicling China’s economic diplomacy in the developing world, a mixture of speculative analysis and ‘connectivity’ hyperbole has attempted to compensate for the lack of official guidance from Beijing. Hypotheses attempting to explain the proposed-scale and timing of the initiative have ranged from pragmatic evaluations of the domestic economic pressures facing the party leadership, to assumptions of geopolitical hegemony and the implied influence of the People’s Liberation Army. Chinese institutions have been key drivers of this media phenomenon but individual sub-narratives have also enjoyed their own impetus. Some of these build on pre-existing discursive trends that were globally-recognizable by the mid-2000s, some rely more on events unique to the Belt and Road Initiative and the international geopolitical context of the long decade that followed the Global Financial Crisis. This paper traces the evolution of this ‘Belt and Road Decade’ in media and academia, and presents the case for both its singularity, reliance on a broader zeitgeist and arguably, its expired utility for Beijing in the 2020s. The paper concludes by reconciling the optimism and scepticism of BRI punditry with the empirical markers for China’s development and foreign relations in the present day 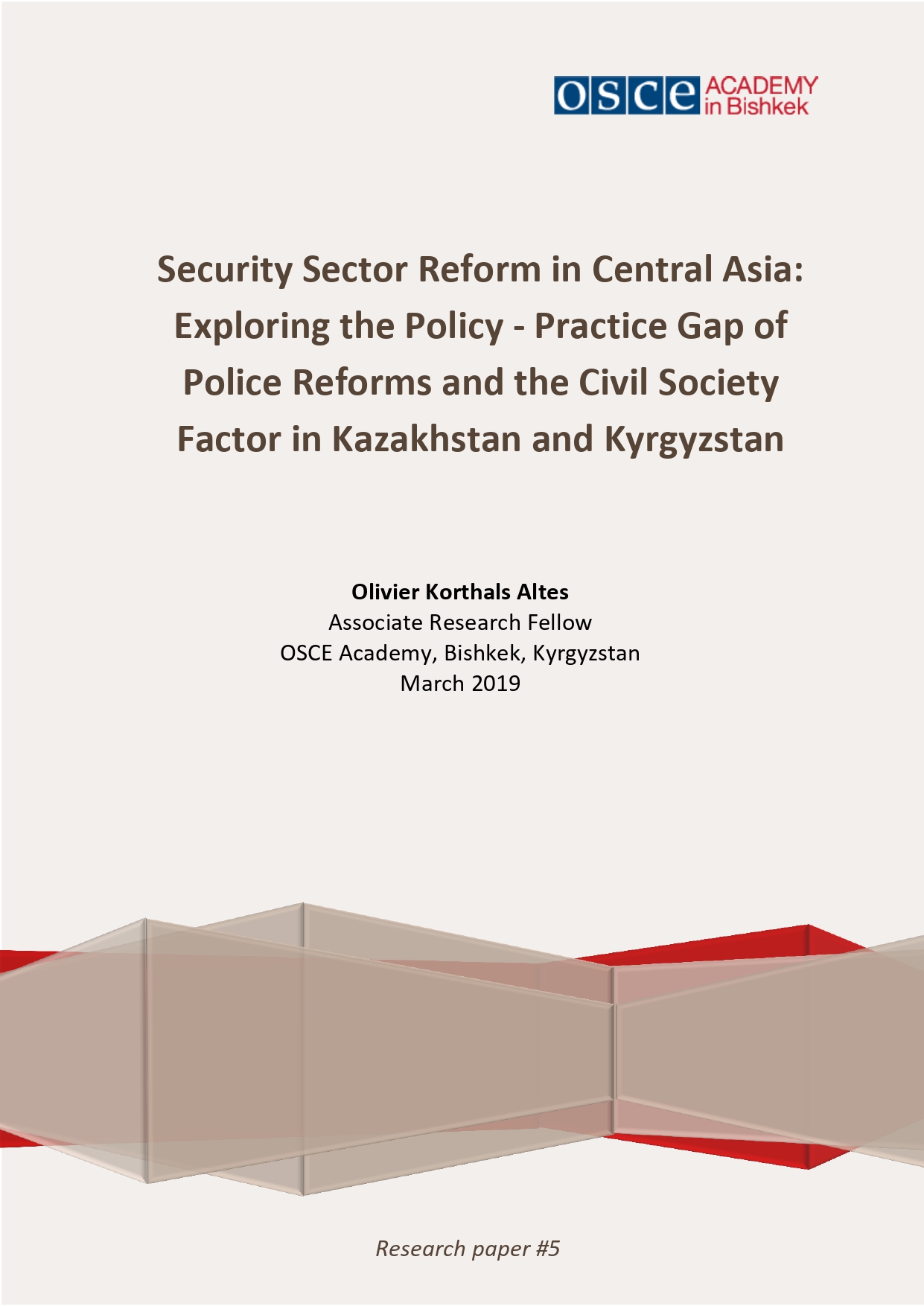 Security Sector Reform in Central Asia: Exploring the Policy - Practice Gap of Police Reforms and the Civil Society Factor in Kazakhstan and Kyrgyzstan

This research paper is an abridged version of author's Master’s thesis, that analyses the policy - practice gap of democratic reforms of the police forces in Kazakhstan and Kyrgyzstan, and the role of civil society within it. This evidence-based assessment has been related to theoretical debates about Security Sector Reform, the current dominant concept within academic and international policy circles on security assistance that entails (re)building and professionalising security forces while creating democratic institutions and mechanisms to hold them controllable, transparent and accountable. In this research, author have suggested an approach to measure progress of democratic governance of the police forces through a number of qualitative indicators that include the creation of independent public oversight and monitoring bodies, battling corruption within law enforcement agencies, and transparency of official police reports and statistics. He has put the formulated policies by national governments and the OSCE annual reports on police-related activities next to his research findings gained from reports and interviews with local civil society representatives, to indicate the rather limited progress of police reforms in Kazakhstan and Kyrgyzstan. It also came forward that strengthening civil society alone will not be enough in a context where the Ministries of Internal Affairs, responsible for the police services and policing, are very resistant to any change, and public support for democratic reforms remains too narrow to make a difference. 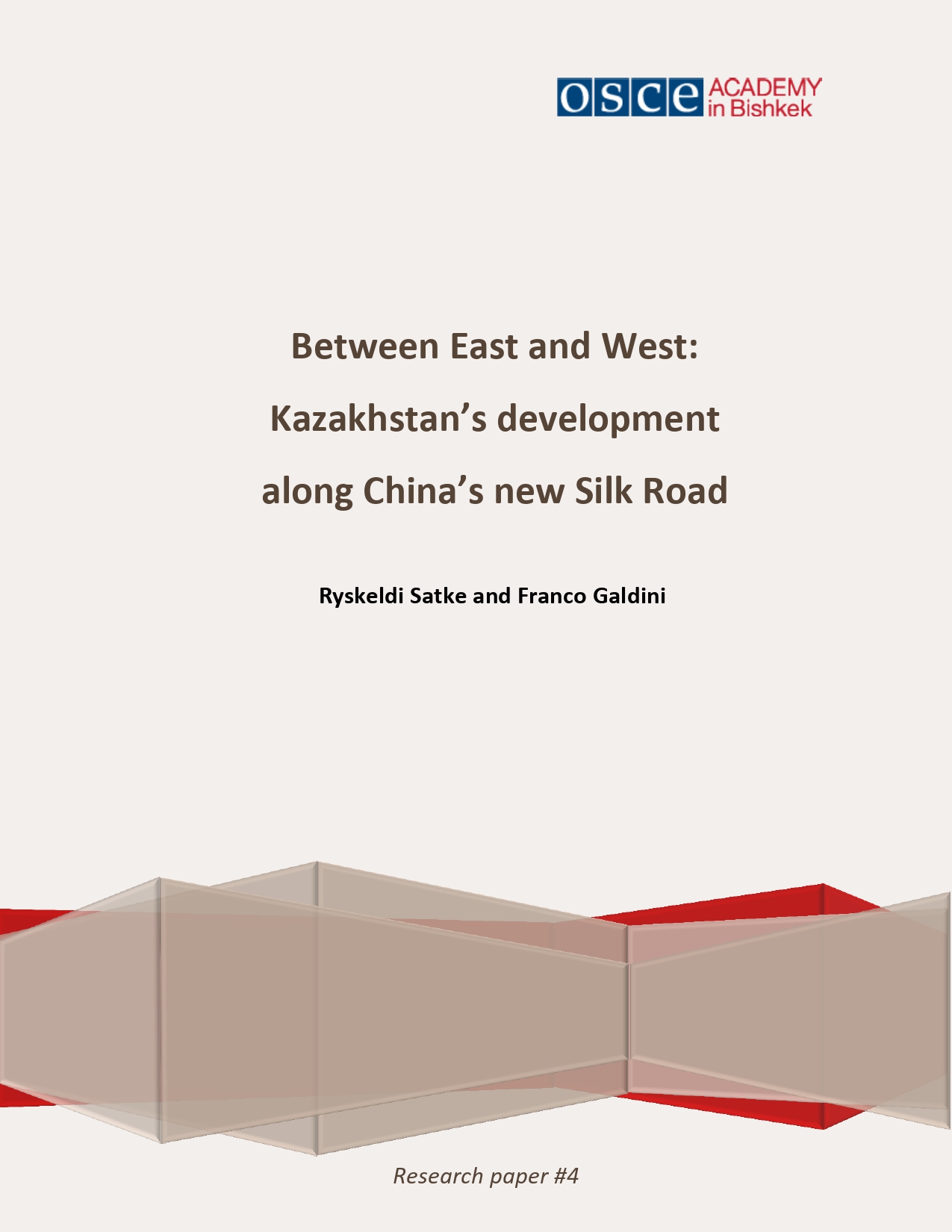 The paper discusses Kazakhstan’s long-term development vision and its ambitious objectives. After presenting the history of the country’s infrastructural projects during Tsarist and Soviet times, it expounds Kazakh President Nazarbayev’s plan up to 2050 to convert the country into a logistics hub between East and West. It then proceeds to set Nazarbayev’s vision against Kazakhstan’s political economic reality, specifically how the leadership’s multi-vector foreign policy is faring between Russia’s regional integration projects and China’s westward push to develop Xinjiang province along the new Silk Road. Finally, the article identifies multiple challenges that may compromise the plan in the future: from the country’s looming political transition, lack of political freedoms and endemic corruption, to China’s Uighur question and Russia’s standoff with the West in Ukraine. A version of this paper was originally published in Spanish in the Revista CIDOB d'Afers Internacionals n. 110, September 2015. Available here. 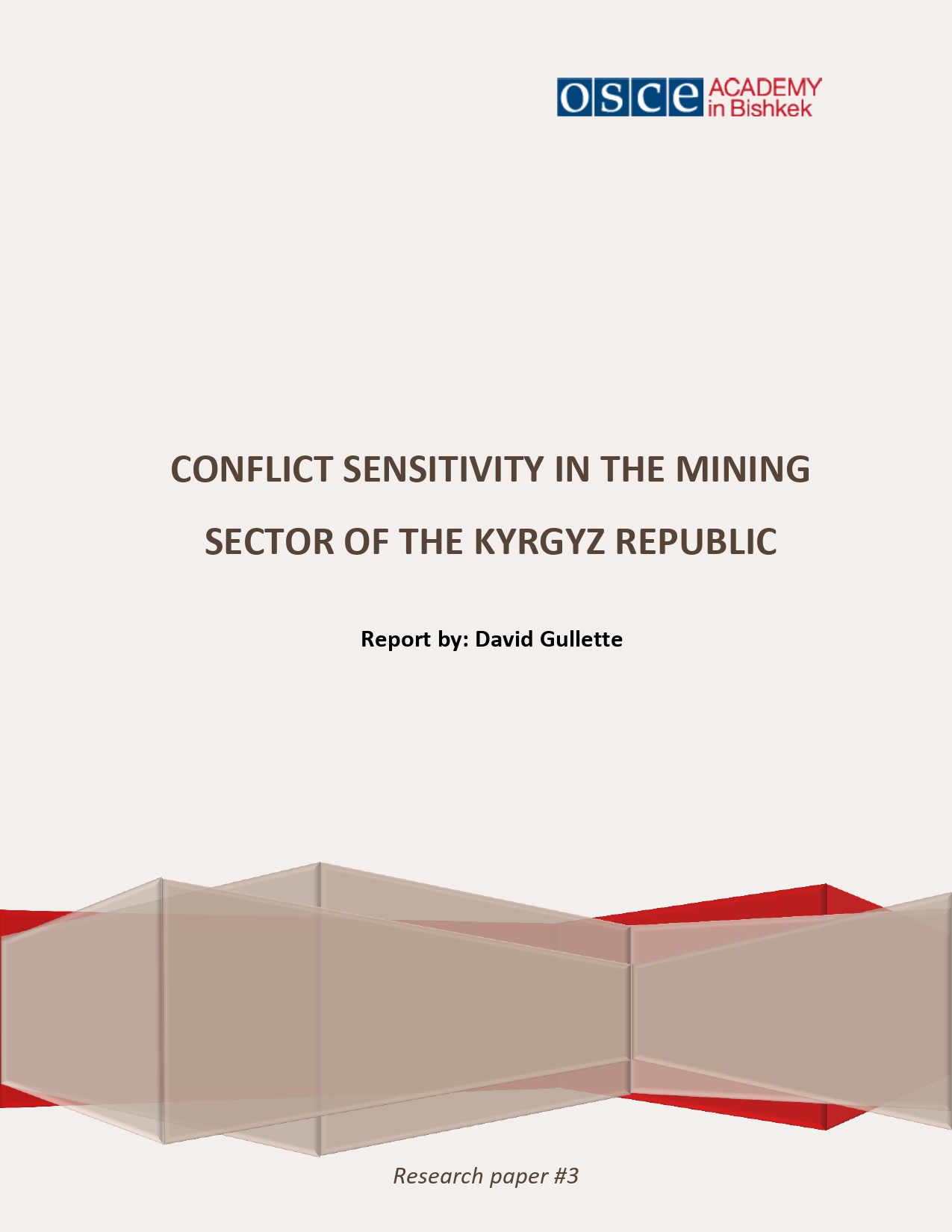 Conflict Sensitivity in the Mining Sector of Kyrgyzstan

In January 2014 the OSCE Academy released the results of a study on “Conflict sensitivity in the mining sector of Kyrgyzstan”. The research was held between August and December 2013 by the OSCE Academy research team with financial support from the Norwegian Institute of International Affairs (NUPI). The project aimed at reviewing the national policies and activities pertaining to conflict management in the Kyrgyz mining sector, compiling detailed case studies of two locations and designing coursework materials that the Academy project to use in its annual International Certificate Training Programme in Conflict Sensitive Development. The project, led by Dr. David Gullette, included research activities in Bishkek and selected field sites. Also, here you find a link to the interview Dr.David Gullette gave to the BBC Kyrgyz Service about this project. Interview available in Kyrgyz language only. 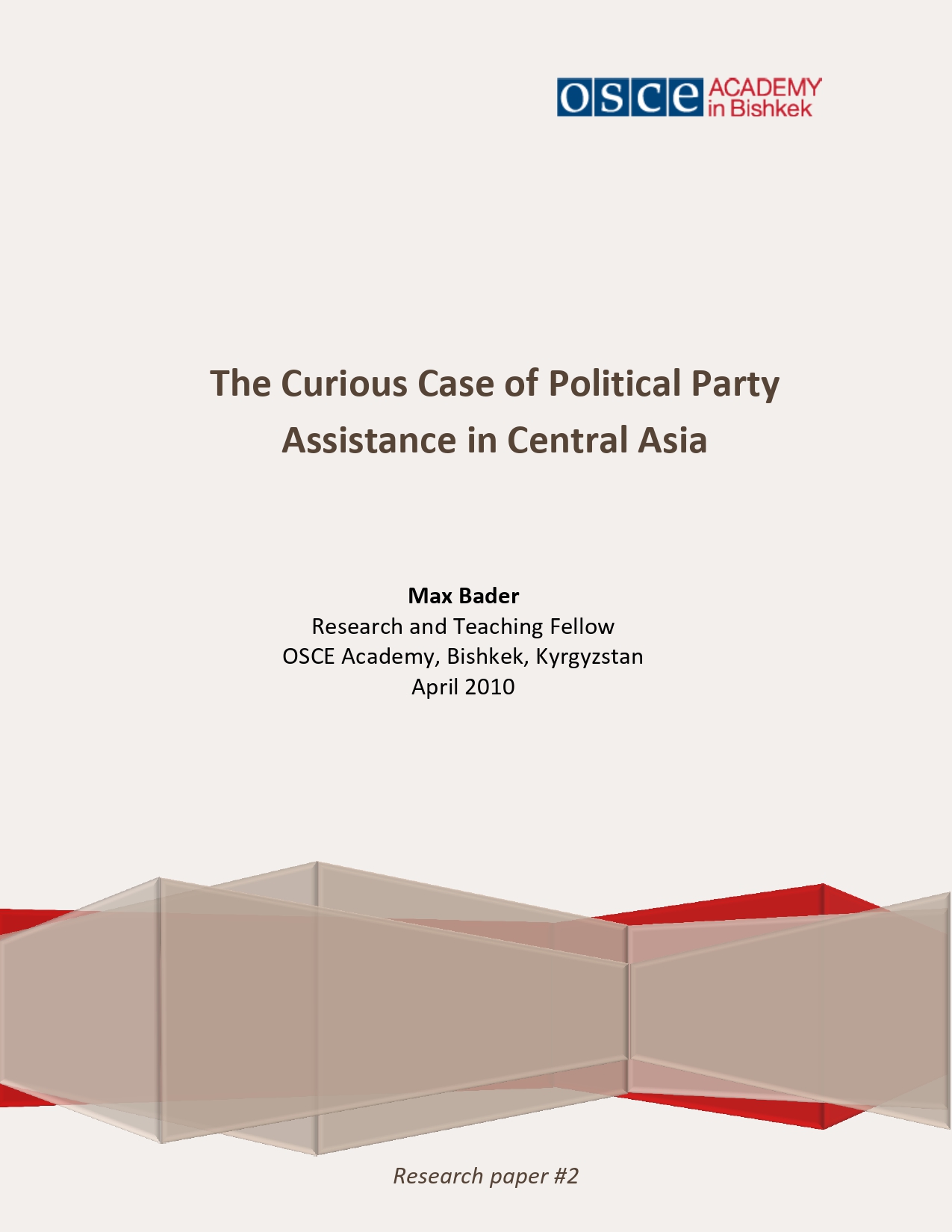 By Max Bader, Research and Teaching Fellow in 2010, OSCE Academy

Drawing on a discussion of political parties and party politics in Central Asia, this working paper entitled "The Curious Case of Political Party Assistance in Central Asia " questions the rationale behind party assistance in the region. 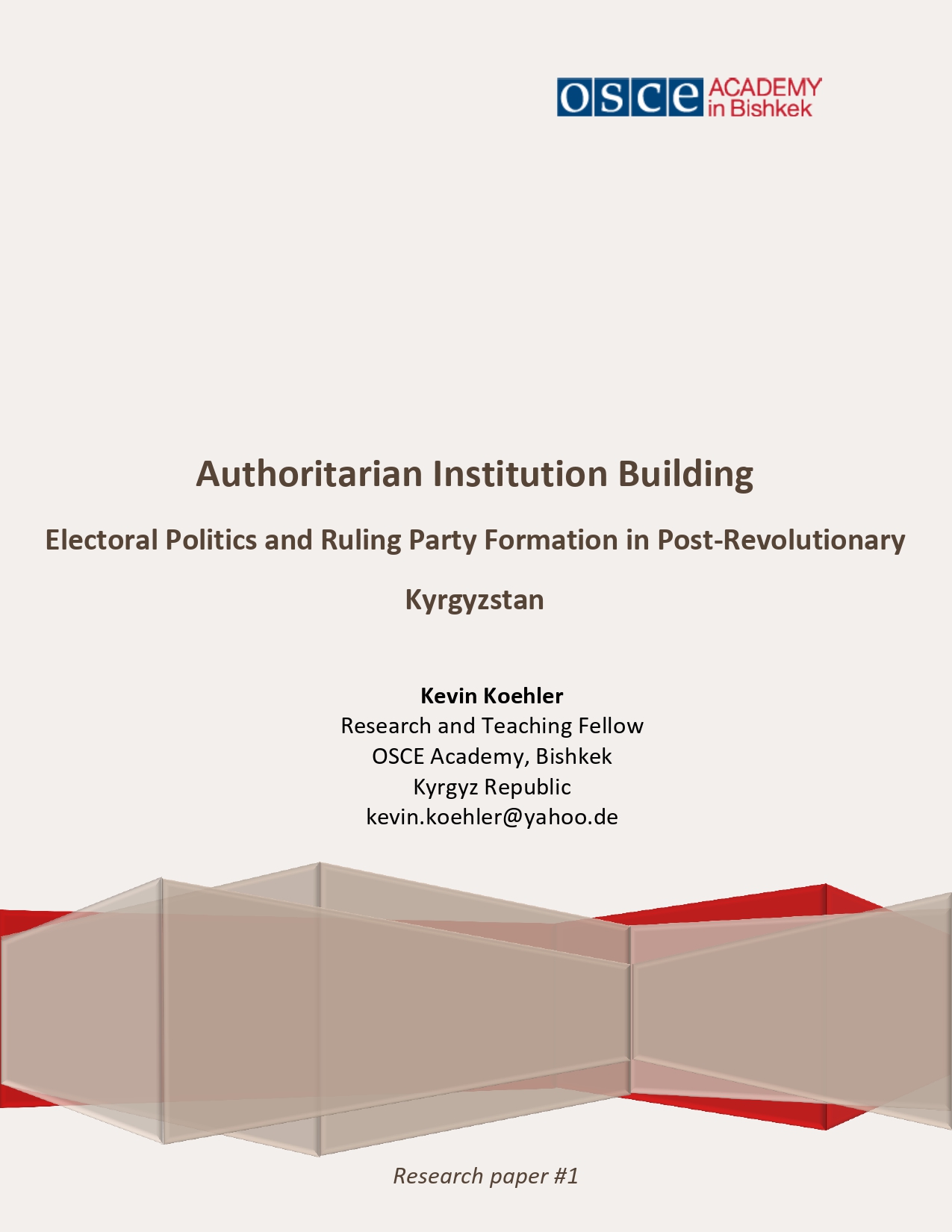 By Kevin Koehler, Research and Teaching Fellow in 2009, OSCE Academy

This research project examined political dynamics in Kyrgyzstan since the 2005 "Tulip Revolution." What were the effects of this event on Kyrgyz political dynamics? Where is the country heading under its new leadership? What is the significance of the institutional changes observable in the country since 2007?
From January to May 2009, Kevin Koehler, Research and Teaching Fellow at the OSCE Academy, conducted field research on this topic. The preliminary results of this project are available in the form of a working paper entitled "Authoritarian Institution Building: Electoral Politics and Ruling Party Formation in Post-Revolutionary Kyrgyzstan."