Students learn about the Consequences of the Illicit Acquisition, Manufacture, Trafficking and Criminal Use of Firearms from UNODC Officer

On 5 March, the OSCE Academy in Bishkek hosted the online lecture ‘The consequences of the illicit acquisition, manufacture, trafficking and criminal use of firearms’, kindly delivered by Mr. Paul Ianovici, Crime Prevention and Criminal Justice Officer at the Global Firearms Programme and Education for Justice initiative of the United Nations Office on Drugs and Crime (UNODC).

This lecture was a part of the course ‘Contemporary Security Issues’ and aimed at providing the OSCE Academy students with practical perspectives on international efforts to fight illicit trafficking in firearms.

Mr. Ianovici emphasized that developing common definitions related to illicit trafficking in firearms is necessary for ensuring effective countermeasures. No less important, he noted, is the process of harmonising the national legislations across Member States, including the need to criminalise illicit manufacturing and illicit trafficking of firearms, their parts and components and ammunition as well as falsifying or illicitly obliterating, removing or altering the markings. In this regard, he underscored significance of the international efforts under the Protocol against the Illicit Manufacturing of and Trafficking in Firearms, their Parts and Components and Ammunition and expressed the hope that more Member States will join this international instrument.

Mr. Ianovici noted that countering illicit trafficking in firearms constitutes an urgent task globally. This statement is well illustrated by the worrying statistics: more than 50 percent of homicides globally are committed by means of firearms. Illicit firearms also tend to end up in hands of violent non-state actors, fuelling conflicts across the globe, as well as in hands of organised criminal groups and terrorist organisations. To elaborate, Mr. Ianovici explained that the recent data shows that illicit trafficking in firearms is closely linked to other forms of crimes, including drug trafficking and migrant smuggling. Drugs were found to be commonly seized together with firearms. Moreover, some criminal groups combine both drugs and firearms trafficking, while other criminal groups exploit an overlap of the routes used for migrant smuggling and firearms trafficking. Illicit trafficking in firearms is also an enabler of terrorism. Thus, it is particularly important to investigate where the firearms that were used in terrorist attacks are coming from, emphasized Mr. Ianovici.

For those students who seek to know more about transnational organised crime, including illicit trafficking in firearms, Mr. Ianovici advised to consult rich sources provided by the Education for Justice initiative that have been developed by the UNODC since adoption of the Doha Declaration in 2015 (available here ). 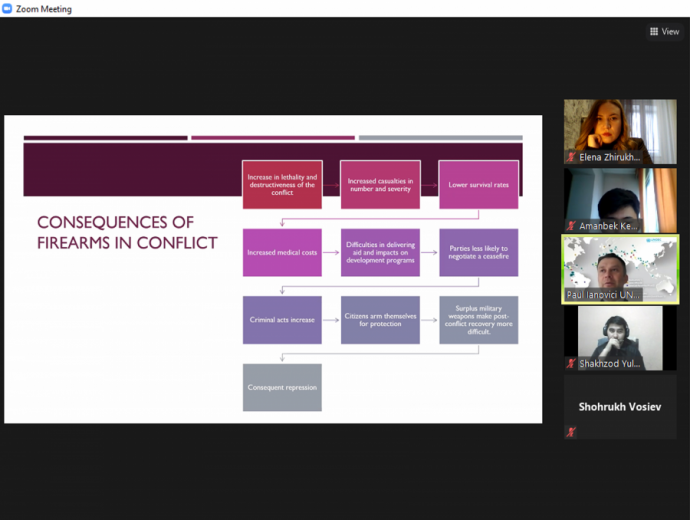