On 15 November 2022, Nima Khorrami, Associate Research Fellow at the OSCE Academy, delivered a public lecture on "Iran’s Aspirations and Prospects in the Emerging Chinese-Indian Nexus in Central Asia and the Caucasus." The lecturer elaborated on Iran's interests, attempts and patterns of deeper engagement in Central Asia and the Caucasus. Mr. Nima indicated two points of Iran’s engagements with CA/C. "First, Tehran’s interactions with these regions have been periodical, with ebbs and flows, which is indicative of a lack of coherent strategy. Second, whenever Tehran does engage CA/C, its actions reveal a wide array of intertwined commercial and strategic issues." Furthermore, Nima Khorrami explained what Iran could gain from deeper engagement in CA/C, as well as Iran's anti-Americanism ideology, and Iran's ties with China and India. Nima Khorami concluded the lecture with the notion that Iran's anti-Americanism ideology prevents it from increasing connectivity with China and India via CA/C. "Tehran thus faces a choice: revise the role of anti-Americanism in its identity as a state, or risk continuing marginalization from a space that by any reasonable geopolitical calculation should be financially and politically profitable for it."

Read the Research Paper on "Iran’s Aspirations and Prospects in the Emerging Chinese-Indian Nexus in Central Asia and the Caucasus" by Nima Khorami here. 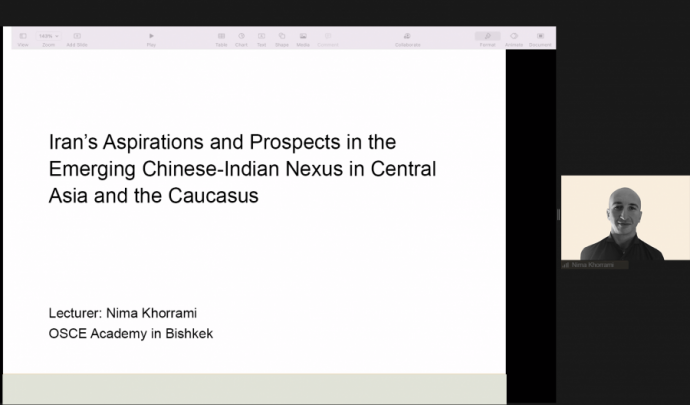