Policy Brief about Kyrgyzstan and the Eurasian Economic Union

The OSCE Academy in Bishkek has published new Policy Brief No. 45 by Ann-Sophie Gast  titled "KYRGYZSTAN AND THE EURASIAN ECONOMIC UNION-A PARTNERSHIP WITH OBSTACLES".

• Two years and a half ago Kyrgyzstan joined the Eurasian Economic Union. The main reasons for accession were dependence on Russian and Kazakh markets as well as the large number of Kyrgyz labor migrants working in Russia and sending remittances home on a regular basis. Moreover, Russia offered an attractive package of compensations and concessions to make accession more attractive and facilitate the transition period.

• So far results are mixed. While FDI has increased and the situation of Kyrgyz labor migrants has improved, the desired economic boost and modernization have not materialized yet. Furthermore, overall export has declined and trade with China, Kyrgyzstan’s largest trading partner, went down. This is due to poor preparations on the Kyrgyz side, difficulties to implement the requirements of the Union, but also a general economic slow-down in the Eurasian region and a diplomatic conflict with Kazakhstan.

• To profit from Eurasian integration in the future, the Kyrgyz government has to invest more resources in the implementation of technical regulations and the establishment of laboratories. Moreover, it has to support small and medium-sized businesses in the difficult transit period. In the long run, the Kyrgyz economic model needs to be transformed and should no longer rely on re-export and remittances, but on its own production and labor force instead. The creation of jobs and the diversification of
export structures are crucial in this regard.
• Last but not least, the Kyrgyz government should invest in the education and training of experts on Eurasian integration to be placed both at the domestic level as well as at the supranational level at the Eurasian Economic Commission in Moscow to lobby Kyrgyz interests more efficiently.

Ann-Sophie Gast is a PhD candidate at the Berlin Graduate School for Transnational Stud-ies (BTS). She is part of the Research Group “The Transformative Power of Europe” at FreieUniversität Berlin. She holds a B.A. in European Studies from Otto-von Guericke University Magdeburg and an M.A. in International Relations from Freie Universität Berlin and the Moscow State Institute of International Relations (MGIMO) in Russia. Her research focuses on regional cooperation and integration in Eurasia, the resilience of authoritarianism and on foreign policy interests of the post-Soviet states, in particular Russia and the Central Asian states. She has recently published a paper on the institutional design of Eurasian regional organizations as well as articles on Russian hybrid warfare and elections in Central Asia.

Central Asia Policy Briefs became possible with financial support of by the Norwegian Institute of Foreign Affairs with a grant from the Norwegian MFA. 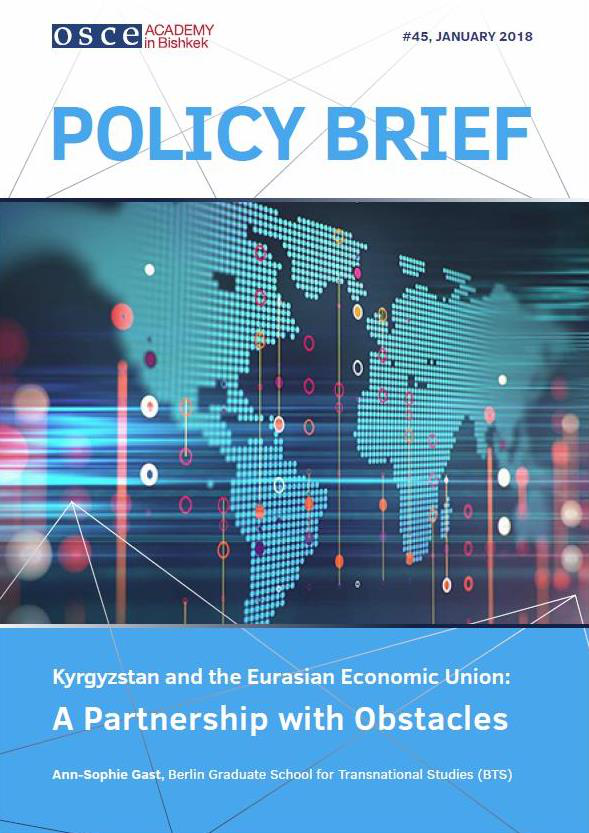