Karlygash Kabatova, alumna, 2014, MA Programme in Politics and Security is from Kazakhstan and an experienced researcher and civic & social activist.  On 1 June, on International Day for Protection of Children, Karlygash launched uyatemes.kz – a website on sexuality education for adolescents.  Now Karlygash is invited to talk shows, interviews, radio, and conferences to discuss the issues related to early pregnancies, sexuality education, sexual harassment and gender issues, etc. Why and how she works on such an important and at the same time sensitive issue is shared in her interview:

Q: Dear Karlygash, how did it all start? What was the push factor to launch Uyatemes.kz?

It all began as a research project. In 2016 Kazakhstan news was full of reports of newborn babies found in the streets, on the road sides, in trash bins and even inside public toilets. At the time I just finished my research fellowship in the Soros Foundation-Kazakhstan's (SFK) Public Policy Initiative program and became very interested in this. Together with my friend, a fellow alumnus, of the OSCE Academy, Sergey Marinin, -who also took part in the SFK's fellowship- we decided to conduct joint research to get to the bottom of why these horrible things were happening. Through our research, we found that schools did not provide any classes on sexual health literacy and safe sexual behavior in a systemic way. We also found that parents are not willing to discuss this topic because they're ashamed and embarrassed because “it's not in our culture.”

Later, while at the Central Asia Program at the George Washington University, I conducted another study on youth access to sexuality education outside of school and found that there were no informal sources of reliable information in Russian or Kazakh language. Therefore, I decided to create such a source myself.

Q: Who supports your project?

The basis of the website was developed at a hack-a-thon in Kiev in November 2017, where I traveled for a few days, from Washington, D.C. I teamed up with a brilliant illustrator from Belarus and a great IT specialist from Uzbekistan and together we created a prototype of UyatEmes.kz. My project won one of the four prizes - a small grant offered by the organizer. This is how I secured the initial funding to support Uyatemes.kz and now I'm looking to apply to more grants as those funds are over. Friends suggested that I start crowd funding to partially finance the project but I'm still doubtful about this.

As for support -in regards to human resources- other than the illustrator and the IT specialist, I have two professional consultants - a sexologist and a gynecologist. They reply to anonymous questions from our young readers. My cousin is a professional translator and translates the articles from Russian into Kazakh.

Q: Now it been a while as the project started. Today's results- is it something you expected to receive? Or more?

What I ultimately want to do is, on one hand, to raise awareness about the need of normalizing discussing sexual health of youth and teaching them about that in schools. On the other hand, I want to provide as many young people as I am able to, reliable information on sexual health and give them a safe place to discuss these issues. I didn't expect to receive, for sure, the amount of support that has been given.

Very often I receive messages of support from different people; university students and young professionals, parents, older people. Sometimes I meet a person at an event and discover that they know that Uyatemes.kz, supports the need of Sex Ed and wish me luck in pursuing my goals.

Within the first week since launching the website, was visited by more than 8,000 viewers. Currently there are about 5,000 regular monthly visitors. Another unexpected thing is that though intended for teenagers, about 80% of UyatEmes.kz visitors are aged 18-34. There are objective reasons for this is that younger generations are more attracted to Instagram than a website. Still, the hunger of young people for reliable information written simply about maintaining sexual health is obvious.

Q: Sexual Education is not a topic that was and is openly discussed in our societies; do you face any antagonism from elder generation for your work?

Probably it's because of my liberal bubble -of educated Russian and English speakers- that I don't face as much negativity as I expected before launching the project. This is not to say that Kazakh speakers are less educated but it is my personal observation that there are more conservative people among Kazakh speakers, even those who studied abroad.

I encounter cyber-bullying or dismissive comments on my work sometimes. I saw comments under one of my interviews - several men said that a woman like me should be killed and discussed how it should happen. Another time, a self-proclaimed “educated religious leader” commented that I was just a dilettante that wants donor money. At times, my impostor syndrome is especially strong and such comments can hurt a little but I'm working on “growing a thicker skin” and not taking them too seriously.

I think the problem is that often the concept of Sex Ed is distorted and misinterpreted. The ultimate goal is not to corrupt the innocence of children and promote early sex, it is to teach youth to care for their health, make informed decisions, and behave in a safe manner. It is a life skill as important as learning to read and write.

Q: How do you cope with it?

I need to stay practical and focused on my work. I don't want to “fight windmills” and prove something to those who are not willing to be open. I receive very much support from my friends, people close to me, and even people that I don't know. Going to events and getting to know other activists, experts in their fields, who work for the good of our societies is also energizing! As banal as it sounds, it really helps me move forward.

My older brother is very supportive of my project and proud of me. My dad is embarrassed of even hearing about my work. When I sent my dad a link to my first interview named “How to talk about sex with children” and he said to my mom, “Why did she even send me this? Discuss it without me!” So, yes. Some people are not willing to change and it's OK.

Q: What are you plans for a near future and in a longer-term?

The main goal now is to secure funds for the project!

I have plenty of ideas on how to make the project more practical and attractive to young people, such as creating an online game, making a series of stop motion videos, and maybe even adding cartoons or comics, or maybe creating a pod-cast. I'm advocating for the introduction of Sex Ed in schools, but while it's not happening yet, I'm trying to offer an alternative, informal source. I attend conferences and speak at events to raise awareness about the need to teach young people to take care of their sexual health. However, perhaps it is time for me to focus on just one thing - advocating for Sex Ed in schools or developing UyatEmes.kz into something bigger. This is the long-term decision that I need to make. 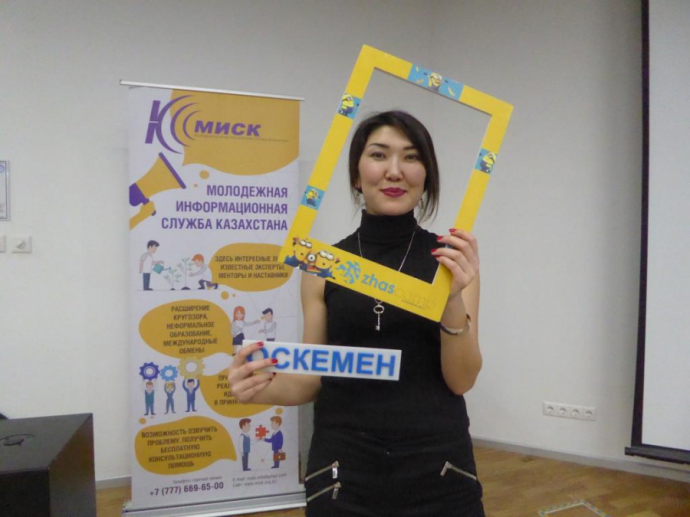